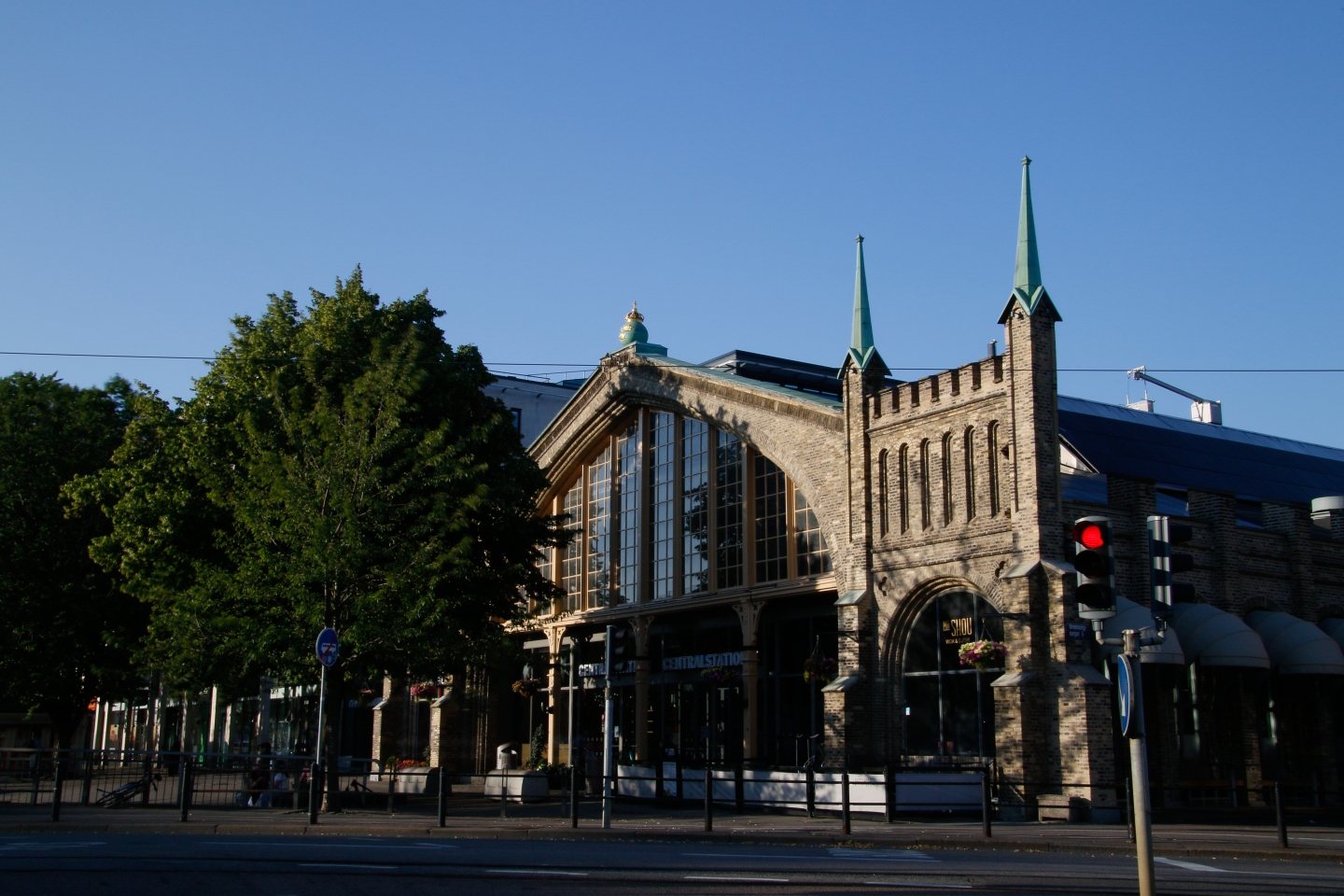 With an eye towards the 16th century, a period when Belgium flourished with famous painters, artists and successfull businesses, architect Louis Delacenserie (1838-1909) created what is today seen as one of the top ten most beautiful railway stations in Europe. Not to say in the world. The viaduct into the station was created by the architect Jan van Asperen, a native of Antwerpen. The large train hall constructed in cast iron and glass, materials still very popular at the time, was designed by Clément van Bogaert (1865-1937). He was a state employed engineer and constructor who mastered the Belle époque proportions very well, famously shown at Antwerpen Centraal. Bogaert was assigned to start planning the railway station in 1886, almost ten years prior to the now so famous main hall designed by Delacenserie was being built.

The construction of the main building started in 1895. It took another ten years to finish, and on 11 August 1905 it was opened to the public. The glass and iron train hall measures 185 meters in lenght and the hight is almost 45 metres. It covers an area of roughly 12 000 square metres.

In the late 20th century Antwerpen saw the need of adjusting to the high demand of faster travel alternatives. A tunnel was built under the current station, to change Antwerpen Centraal into a through station, so that it was not a traditional terminus any longer. To an estimated cost of €1.6 billion the station is now able to handle European high speed trains like Thalys, HSL 4 and the HSL-Zuid. The project was finished late March 2007.

Is Paris-Gare-de-Lyon the most wonderful of Paris’ seven major railway stations?

The creation in the 12:th arrondissement was designed by Denis Marius Toudoire (1852-1922). The architect, born in Toulon, graduated from École des beaux-arts in 1879 and was to become a major French designer of railway stations. He also co-designed Le Grand Post d’Alger with Jules Voinot (1855-1913) among many other buildings in Algeria, North Africa.

Paris’ Gare de Lyon opened in time for the World Exposition in 1900. One of the building’s most famous exterior details is the large clock tower on the corner of the main body. If you raise your eyes you will also notice beautiful facade details like statues and carved art noveau ornaments.

One of the most talked about places along one of the thirtytwo plattforms of Gare de Lyon ought to be the marvellous and elaborately painted, gilt shrine of a restaurant: Le Train Bleu.
For almost 120 years travellers from all over the world, to and from the City of Light, have been served the most exquisite food at tables under large glistening chandeliers and a glorious painted roof.

According to figures from 2018 roughly 90 million passengers pass through Gare de Lyon every year. A rather busy place. But also a very beautiful railway station in midst of all the stress and rush.

Bristol Temple Meads railway Station takes its name from the old Temple Church situated nearby. It was once a church run by the Knight Templars. The land where today’s railway station is to be found was undeveloped pastures until just two hundred years ago, and the first station building was placed what was just outside the city centre at the time.

The original terminus was built in 1839–41 for the Great Western Railway, the first passenger railway in Bristol. It opened on 31 August 1840. The building was designed by Isambard Kingdom Brunel (1806–1859), who also designed the railway. The station was on a viaduct to raise it above the level of the River Avon. The station was covered by a 60 meter train shed and extended beyond the platforms into a storage area and an engine shed, fronted by an office building in Tudor style. The old train shed is today used as a venue for weddings and parties.Bristol Temple Meads is the oldest and largest railway station in the city. Today it is important as a transport hub and for public transport, though Brunel’s terminus is no longer part of the operational station. The modern station handles roughly 10 million passengers each year, but the old terminus had already outgrown itself in the mid 19th century. To accommodate the increasing number of trains, the station was expanded in the 1870s by Francis Fox (1844–1927) and again between 1930 and 1935 by Percy Emerson Culverhouse (1871–1953). Between 1871 and 1878 the station was extensively rebuilt in the Gothic style, and it is this facade we meet today.

Strasbourg-Ville Railway Station in France. What a place.

On no. 20 Place de la Gare in Strasbourg is one of Frances most impressive railway stations situated. The main construction from the 1880s might not be as exciting as some other railway stations in Europe, though impressive, but the contemporary structure surrounding the historic building is what makes this architecture fascinating as a whole.

The architect Johann Eduard Jacobstahl (1839–1902) was responsible for the design of the historical style building raised between 1878–83. The building replaced an earlier station building which was demolished in 1874. In 1900 a new main hall was added as an imperial waiting room, a room today known as the Salon de l’empereur. The designer Herman Eggert (1844–1920) placed huge stained glass windows, manufactured locally by the famous Ott Frères factory, which still today spreads a beautifully warm tinted glow from the sun light in the very busy railway station. More than 20 million passengers pass through the Strasbourg-Ville every year.

In 2008 the modern extension and refurbishment of the station building was finished and the ingenious glass dome, designed by French architect Jean-Marie Duthilleul (born 1952) and built between 2006–07, gave extra space and light to the second most busy railway hub in France. No wonder it is busy since one of the two main meeting places for the European Parliament is placed in Strasbourg.

This is a railway station to truly fall in love with.